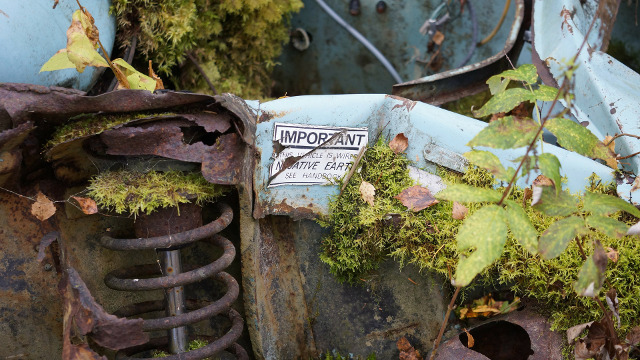 Some mornings, the moon plays off a rising sun, lingers in a lightening sky. In Native American tradition, each month’s full moon was ascribed a name representing a characteristic of that time of year, for example, January’s Wolf Moon and June’s Strawberry Moon.

Morning moons aren’t rare in their ebbing circuit across an early sky. And but for nature’s yawns and stretches, young country days are an exercise in silence. Leaves hang softly; a breeze quivers in the air; the land lays quiet except for a blue jay’s screech and cattle lowing for the disappearing grass.

Twenty years in Milwaukee and I’m more than citified, know urban sprawl and traffic jams. I wish it no more. It’s out of my blood. The desire for anything metropolitan has departed. These days, as the painted wooden plaque in the farm store so aptly admonishes, I “never stand behind a coughing cow.”

At the checkout lane, the cashier has a tattoo and six or eight piercings in each ear. Her hair is short and gray except for one long braid in the back. She’s at least sixty, and adds a modern touch to this decidedly rural mercantile that offers everything from needle syringes for bypassing the vet, to the latest stylish Carhartt clothing, to baby fowl, to tires and Pringles and complimentary popcorn.

Trucks. I began admiring them when I finally got used to the high step-up and rhythmic clatter of our Ford diesel, when I finally mastered the wide front seat and having to scoot farther right so as to be dead center of the steering wheel, and when I finally grasped the fact that such a long wheelbase maneuvers potholes and gravel roads with handy ease.

My truck is a chariot to heaven and Everygirl’s adventure. Now I demand the scenic routes and dust-filled byways, extol the clouds and blink away the busyness. I drag along wonder with each escape, and there’s not a rural setting beyond my scrutiny.

Too much dirt mucks up the cogs. Too many details and the lines drag down. Just bury the stuff in the pasture or dump the junk in the lowlands, old farmers say. So rusty metal bones and industrial fuel tanks and Frigidaire washers fill the gullies next to great slabs of beef roaming acres of what used to be the richest land on earth.

What’s left is our chemical-laden soil, a deathtrap for bees and butterflies, and its runoff sabotages our rivers, lakes, and seas. Runoff from Iowa reaches the Gulf of Mexico. We use plastics too, those filling our oceans and ensnaring the fish. This is our apocalyptic seedbed, our darkening hope, and it envelops this globe.

People do clone best; clone is what we do. We forget that sky is not a clone. Dirt is not a clone. Every animal strides to its own unique rhythm unflustered by the concept of uniformity. When does the light flicker on, when does individuality strike us soundly enough that we finally say, I am, I am, I will be rare and new.

Life is place and setting: how a land feels as it trickles down the gullet of identity. It’s the slipping away of an all-night moon and the slant of an early morning sun piercing the blinds, the speed of clouds carried over a pasty mountain ridge, and rush hour traffic whether a convoy of three hundred sheep marshalled by an attentive shepherd or a swarm of three thousand cars with right-side steering wheels crowding narrow Paris streets. It’s the air we breathe, fresh and wild, or stilted and heavy.