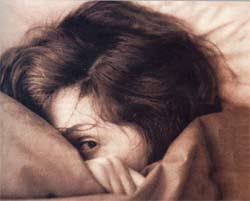 She is given a task that morning, one that is not grand or unique. She has carried it out a hundred times before, but today her thoughts get muddled and bleak.

Some days it seems she floats on a breeze, her mind at ease, no troubled sleep. She carries with her woes and strife from days gone by, pain that cut so deep its internal scars might never heal. Yet everyday she wakes and stands and moves her feet, paints on a smile with cracked teeth, and dons her armor even though it is weak. She does not allow herself to mope and weep, but pulls back her shoulders and struts down the street.

She surges towards her goal, determined to fulfill her task, courageous and strong and happily content. She knows where she’s going, she knows what needs done, but halfway there, there’s a bump in the path. She sees it coming and tries to avoid it, but she’s thrown off course and now everything is ruined.

That’s when she feels it, a shiver running down her spine unbidden, and though she cannot see it, she knows that the beast is coming for her. She looks down at her armor, all battered and cheap, and she thinks about fighting, but her mind is too weak. Where before she had been confident, so sure and so strong, now her plans have been altered and her whole body has gone numb.

The beast is coming fast and hard, she can hear its thundering feet. Her heart leaps into her throat, fear coiling in her chest as her lungs constrict. Her body is slow to respond, even though she is desperate to run, and the first few steps she takes are tremulous and clumsy. She grits her teeth and forces her stiff muscles to obey, and soon she is sprinting for her life, desperate to outrun the beast, desperate to escape what fate has thrust upon her, even though she knows she is too late.

The beast comes for her nearly every day with no rhyme or reason to its scheme. Its arrival is seldom anticipated or planned, but she can always sense it the second it grows near. Though it is never an early enough warning for her to truly escape, and she knows that she never will, she still tries, again and again, each time hoping for a different result. Some days, she is too tired to run, so she bargains and pleads. Some days she turns to face the beast and tries to fight back, but the beast overpowers her every time, leaving her bloody and weak. Some days she runs until she thinks that she has won, only to turn around and see that the entire day is gone and she is far from home, and the beast slinks back into the shadows with a broad smile of glee.

Today is another sort of day. It is the type of day when she knows, no matter what she decides, that the beast will capture her in its teeth before she can even think. Still, she attempts to flee, but she does not make it far when she feels the beast’s warm breath tingling on the back of her neck. She pushes herself harder, arms and legs swinging, head ducked down as if to increase her pace. Sweat forms on her flesh, races down her spine, pools between her breasts. Her knees nearly buckle, and her legs are spent. When she gasps for breath, the air gets trapped somewhere in her chest. Nausea coils in the pit of her stomach, the world spins and her head feels dizzy.

As she runs, she tries to remember a time when the beast did not chase her. It has been so long now that she cannot truly recall. She remembers fighting other beasts, beasts that still haunt her at times, but they are only nightmares now, past woes she tramples on and scrapes from the bottom of her feet.

As she runs, she sees other people passing by, and they look at her as if she has lost her mind. She covets those who do not suffer the same. She looks at them hard as she’s racing by, out of breath and full of misery, and she wonders how they can gaze upon the beast so blankly and without fright. She notices, too, that some of them have beasts of their own. She can see it in the twitch of their eye, the flinch in their shoulders, the stutter in their speech. She wishes to commiserate, to seek comfort in their comparable fates, but when she is ensnared in the claws of her own beast, she loses the ability to speak. How can she come to know theirs when she is so deeply scared?

As the beast comes nearer, she makes one last desperate leap. She outstretches her arm, in the direction of her original goal, but everything is distorted now, and she does not know where to go. It feels as though she is reaching for something she cannot grasp, always so close, yet so far. She tries to swallow, but the air is too thick. She tries to keep going, but she’s too far off her path. No amount of reaching will get her there.

Then the beast catches up to her, wraps its weighty, gargantuan palm around her waist, and she is jolted to a stop, her stomach heaving a little from the force. The beast’s claws stab through her abdomen, and her mouth opens in a silent scream. Her feet are lifted from the ground and she is suspended there, with nothing but time to think. The sharp daggers in her stomach twist and cleave. She closes her eyes tight, tries to breathe through the pain, but the more she focuses on it, the worse it seems to become.

The beast’s mouth is close to her ear, and it whispers to her softly, filling her head with more worries and fears. “What good are connections when they only bring strife? What good are your words when they have no design? There is nothing for you here, no reason to fight. You can run, and you can hide, but you’ll never defeat me, so why even try?”

In the midst of her agony, she finds her voice enough to hopelessly query, “Why? Why me?”

As per usual, the beast has no sympathy. “Our fates are intertwined,” it says simply. “We are forever linked, you and I. Come rain or shine, no matter where your life leads, there I shall always be.”

She has no fight left within her, now her thoughts are just bitter. Her task is not forgotten, but it’s too heavy a burden. She wants to sulk and complain, even though nothing will change. What is the use? She will not defeat the beast today.

The beast eventually lowers her back down to the ground, loosens its grip on her wounded middle, though not entirely, and she takes the moment to breathe, to even her breaths as she hadn’t been able to before. She takes one shaky step forward, swallows the nausea, and forces herself to push forward. The beast does not inflict further pain, but it follows close behind her, mimicking her every step, its heavy body wrapped tight around her back and chest. With no choice but to accept its frequent presence, she tries to carry on. The beast always lurks in the shadows or presses against her spine. It is always enshrouding her like a heavy cloak, always waiting to strike, always weighing heavily on her mind. Some days she makes it through with little trouble from the beast. Some days she is dragged so far from the trail that she makes it nowhere. Yet still she struggles, still she fights, even when the beast comes for her, day or night.

Lauren Trail is an English major at Hagerstown Community College. She enjoys margaritas and long walks on the beach.

One Reply to “The Beast by Lauren Trail”