Here are two wonderfully evocative poems Hiram sent us. They may be carefully crafted, but they certainly aren’t fragile.

That was so long ago that it’s hard to pinch —

Whole hills have turned the other way in the meantime

Most babies who left home have come back driving already

and the trees from then are now two-by-fours.

So why bother with such things that should be forgotten?

Why let years ago get to me?

Why oh why can the turned up sounds

of an every so often mouth

Because this curly damn morning’s crackle

What was said so oozy sounded like a ghost

and slipped me right back to when

My heart had just barely started

It grabbed me by my surelys

and took me back to the days

I was as spilled in love as a glass of milk.

In the Next Room Over

I’ll bet you whatever you want

That she won’t make it through the week

and that’s not being dreary

So anything out loud she says pay attention

But especially do if you hear her coughing

or if you smell doom in the hay

or hear some water swirling

Long long ago when things were simple

as that finger in your ear

the fullest of apples

and the need to aver deeply is with us

And will you just look at this little frame –

There we were once

Posed under a tree

She was the robin —

Larew’s poems have popped up recently in The New Ulster, Voices Israel, Amsterdam Quarterly, Contemporary American Voices and vox poetica.  His fourth collection, Undone, was published in 2018 by FootHills Publications. On Facebook at Hiram Larew, Poet and Poetry X Hunger. 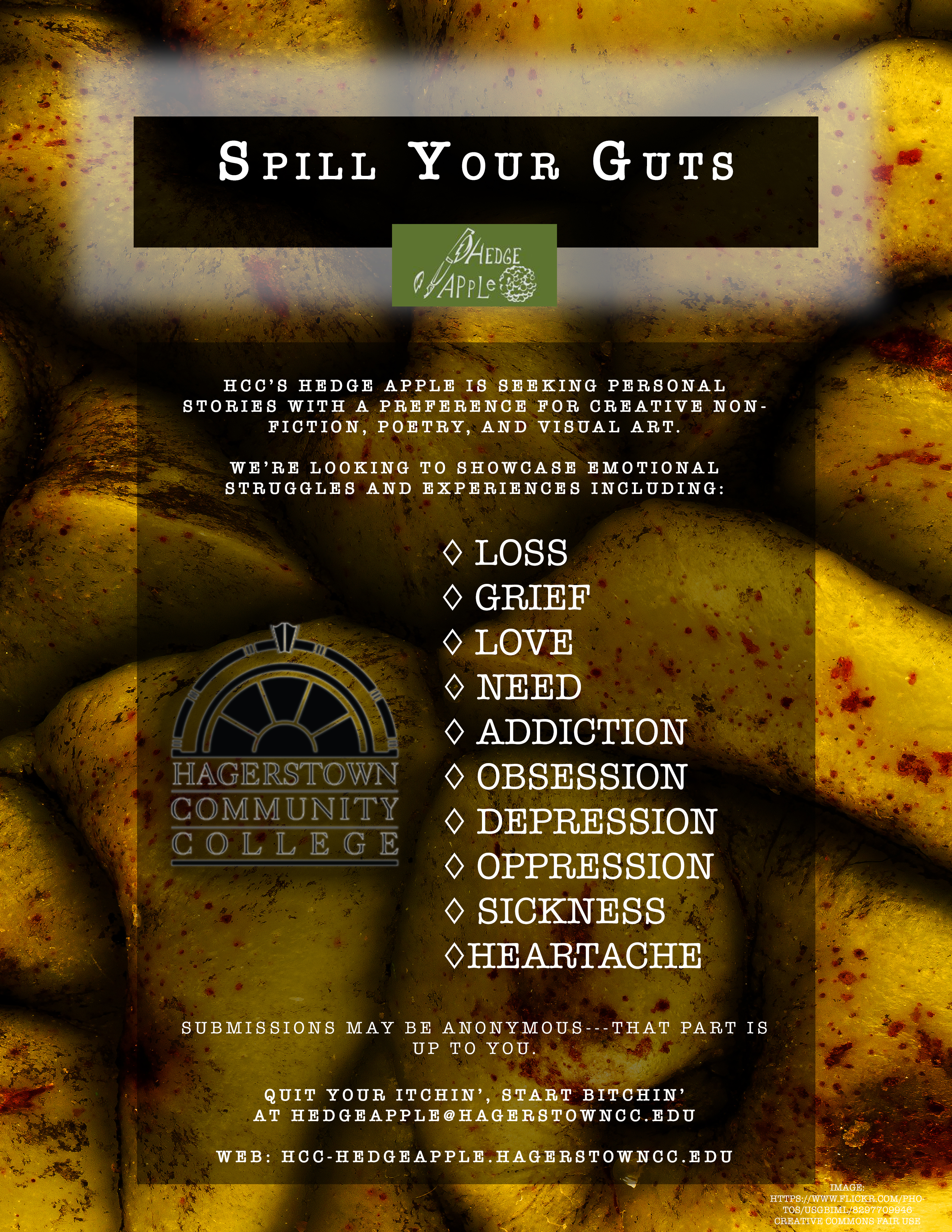 Spring has yet to come (in the northern hemisphere at least,) but winter’s breadth has done little to stop the slew of exciting ideas pouring from our elated hearts. Because the Hedge Apple is continuously spun with the preferences of student-interns, editors change with the seasons. That cycle of change results in an unebbing tide of fresh ideas each and every magazine. Mr. Garlock and Ms. Hogue have ascended into the hall of records to join hands with all editors preceding. The great unity that is locally known as “finishing the English program” is before them.

Now that we’ve introduced ourselves, we’re going to pick up where the last issue ended. To continue the glasnost begun by our esteemed predecessors, we are still accepting submissions from the wide, wide world and all the people in it–so keep ’em comin’, world.

With that said, we can also formally introduce the first of this Spring’s themes, so keep reading. It’s a goodie. Society doesn’t want you to believe that your secrets matter. Hiding away your true selves and making it through the day with ingenuine smiles gets exhausting, but that was yesterday. Today, allow this digest to dive into your gutsy stories–sans reflux. Remove the protective layers of secrets and give in to the seduction of nakedness: loss, grief, love, need, poverty, addiction, obsession, social depravity, depression, mental health, oppression, sickness, heartache, detachment, dissociation, mind-numbing stress, and that which evades description. Regurgitate the ugly monsters from within, exfoliate the things that make you itch, strip your skin, and send those skeletons lurching into the light of day. We want the things that scare you, hold you, lift you up and drag you down. This February, air out your intestines between the pages of the Hedge Apple.

Submissions can be anonymous or not–that part is up to you. Quit your itchin’, start bitchin’.

Before you go, set a reminder to keep checking back. We’ll update this page as the rest of our themes roll in. If you plan to submit for a theme, make sure to let us know in your cover letter. For more information, refer to our Submission Guidelines.